Clean tech is one of the main ways that society can reduce its impact on the environment, particularly in terms of its carbon footprint. Significant sums have been invested in several industries and public policy has subsidised large scale deployments to bring forward the environmental benefits and encourage the development of new industry sectors.

But amongst all the hype, it is often forgotten that the underlying success factors for the Clean Tech industry are the same as any other: the economics need to be competitive with existing technologies or existing ways of achieving the same end. The business model needs to be efficient, scaleable and generate benefits for all stakeholders. And these criteria needs to be met absent of any subsidies and irrespective of the economic benefits of reducing carbon emissions.

One useful way of assessing technologies according to these criteria is to categorise them according to their potential for generating economic benefit when considered as replacements for existing alternatives.

Abatement cost curves are a valuable tool in public policy

The global consulting firm McKinsey has carried out a form of this analysis in a series of reports called “Pathways to a low-carbon economy” in which it publishes global and national “abatement cost curves”. These curves display the full range of technologies (on the horizontal axis) that are required to achieve carbon neutrality on a global or national basis. The vertical axis represents the net economic cost (up) or the saving (down) of each technology if applied today.

The latest long-term abatement cost curve (up to 2030) is as follows: 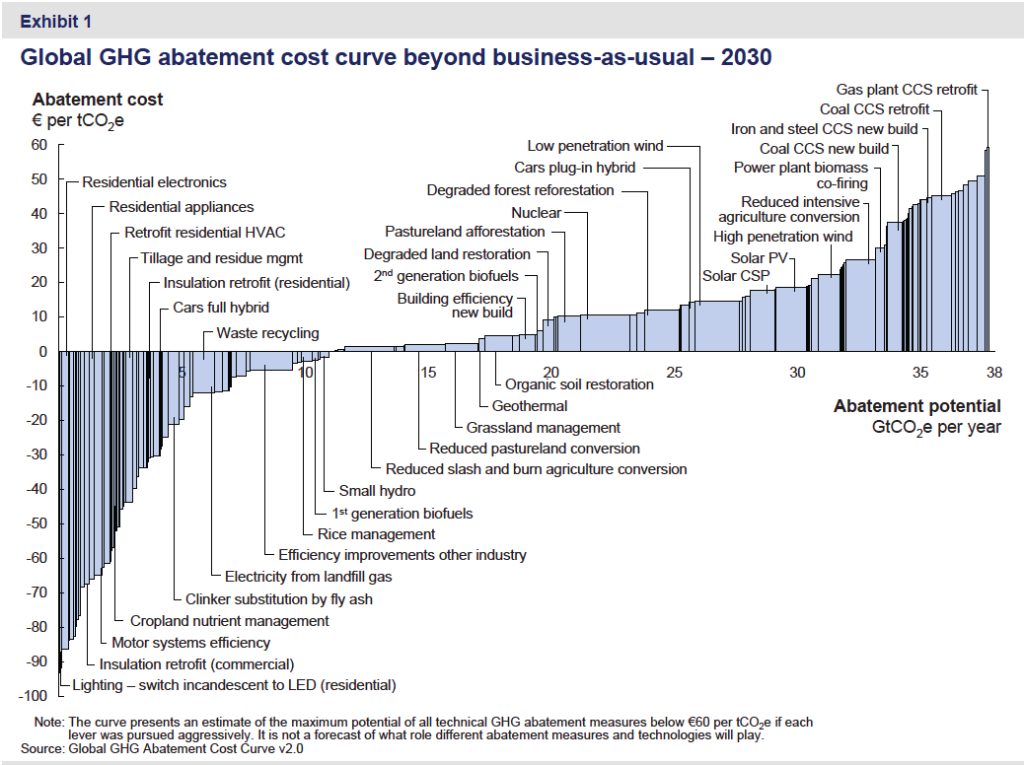 Clean Tech is not as expensive as many believe

It is worth making three observations in relation to this curve:

In other words, many of these technologies offer considerable economic benefits on their own, and even if we decide to attempt Carbon Neutrality at the earliest possible opportunity, the net economic costs are much lower than generally acknowledged.  And of course, the rate of improvement in these technologies in terms of technical and economic efficiency is such that, when their implementation is correctly prioritised, there may in the end be no economic cost to delivering a carbon neutral future.

These are observations not widely recognised to date, and address many of the high level concerns raised in both political and industry circles.

The policy priority: incentivise improvements in those technologies contribute most to abatement and have the best potential for delivering economic benefit

It is now clear that public policy and private investment should focus on those areas that deliver the most quick wins and thereby maintain the economic and political momentum required to deliver a carbon-neutral future.